What is a Rasberry PI?

The Raspberry Pi is a low cost, credit-card sized computer that plugs into a computer monitor or TV, and uses a standard keyboard and mouse. It is a capable little device that enables people of all ages to explore computing, and to learn how to program in languages like Scratch and Python. It’s capable of doing everything you’d expect a desktop computer to do, from browsing the internet and playing high-definition video, to making spreadsheets, word-processing, and playing games.

What’s more, the Raspberry Pi has the ability to interact with the outside world, and has been used in a wide array of digital maker projects, from music machines and parent detectors to weather stations and tweeting birdhouses with infra-red cameras. We want to see the Raspberry Pi being used by kids all over the world to learn to program and understand how computers work.


WHAT ARE THE MODELS?

This model is usually bought for embedded projects: because it’s missing a few ports and an Ethernet chip, the Model A is lighter and consumes less power than a Model B. We see a lot of Model As used in robotics; and also in projects where weight and low power are paramount, such as the very popular high-altitude ballooning high-jinks pioneered by Dave Akerman, and now being reproduced in schools around the world. Model A in combination with a wifi dongle is also ideal for users who just want a Raspberry Pi to act as a media centre running behind their television.

The Model A+ is the low-cost variant of the Raspberry Pi. It replaced the original Model A in November 2014. Compared to the Model A it has:

More input outut's(GPIO). The GPIO header has grown to 40 pins, while retaining the same pinout for the first 26 pins as the Model A and B. Micro SD. The old friction-fit SD card socket has been replaced with a much nicer push-push micro SD version.

Lower power consumption. of between 0.5W and 1W.

Smaller, neater form factor. We’ve aligned the USB connector with the board edge, moved composite video onto the 3.5mm jack, and added four squarely-placed mounting holes. Model A+ is approximately 2cm shorter than the Model A.

Model A+ is for embedded projects and projects which require very low power, and which do not require Ethernet or multiple USB ports.

Raspberry Pi Model B has 512MB RAM model with two USB ports and a 10/100 Ethernet controller. As typical of modern computers, generic USB keyboards and mice are compatible with the Raspberry Pi B. The Raspberry Pi use Linux-kernel based operating systems. The Raspberry Pi B does not come with a real-time clock, so an OS must use a network time server, or ask the user for time information at boot time to get access to time and date info for file time and date stamping. However a real time clock (such as the DS1307) with battery backup can be easily added via the I2C interface. 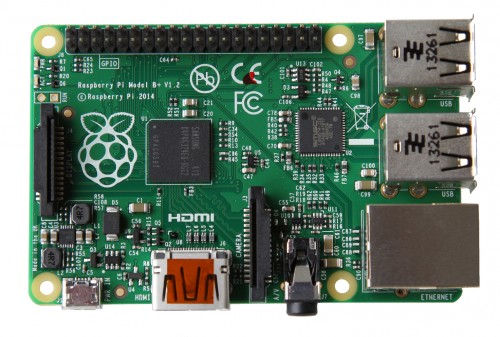 The latest addition to the Raspberry Pi family, the Raspberry Pi 2 takes the platform to a completely new level. Combining a sixfold increase in processing power and a doubling of memory capacity with complete backward compatibility with the existing Model B+, Raspberry Pi 2 is the perfect board for professionals and hobbyists alike. The new Raspberry Pi 2 - Model B is jam packed with features! With a new quad core processor and twice the memory with a massive 1GB RAM, It's a whopping 6x faster than its predecessor. The ultra-low-cost, deck-of-cards sized Linux computer has had a makeover.

Identical board layout and footprint as the Model B+, so all cases and 3rd party add-on boards designed for the Model B+ will be fully compatible.

40pin extended GPIO to enhance your “real world” projects. GPIO is 100% compatible with the Model B+ and A+ boards. First 26 pins are identical to the Model A and Model B boards to provide full backward compatibility across all boards.

You can now provide up to 1.2 Amp to the USB ports – enabling you to connect more power hungry USB devices directly to the Raspberry PI. (This feature requires a 2Amp micro USB Power Supply)