Frequencies in theses bands have a tendency to bounce off the ionosphere and bounce around the world it is quite possible to talk around the world on very little power with this system. This is why this is used by international shipping, aircraft and some out back stations. MF/HF frequency’s are also quite dependent on the sun and time of year, the more active the sun the grate the distance travailed, by the signal. It also very common that a station 100’s of kilometres away can hear you but a station down the road will not, this is another reason MF/HF is used for long distance communications this is also called Skip.The current Space weather and atmospheric conditions are shown at the bottom of home page 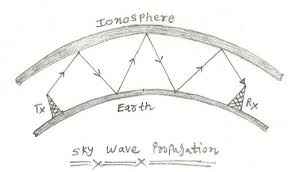 Frequencies in this band are use for medium distance communications and will pass over and around small obstacles such as hills but not mountains. There is affect called ducking on VHF which is when a radio signal tunnel forms in the atmosphere that will carry the signal for 100’s of kilometres, theses manly occur in summer on a sunny day when hot and cold air mix, VHF is used by marine, aircraft, Amature radio, and FM radio along with some companies and public safety groups.

Frequencies in this band are directional the rule with UHF is you must to be able to see the other station to communicate with them, so the signal will not go around mountains round bends in valleys, UHF is manly used for short distance communications up to 50Km’s, Ducting is also possible in this band, UHF can also be stoped by wet foliage, rain, wind and smoke, the high end of UHF is where Mobile Phones, wireless net works and microwave ovens work. UHF is very popular due to the small size of units and good quality of signal.

Frequency’s in the SHF range are extremely direction and can be stopped by almost anything. Most applications of SHF are for Satellite and point to point systems like high speed computer or voice links between buildings and towns. These frequencies are used for this because of their ability to carry high speed digital information better than most other frequency’s

Station A can hear you on UHF and VHF

Station B can hear you on UHF and VHF

Station C can only hear your signal on VHF

Station D can only hear your signal on HF