Modulation is the term we use to describe the way we put information on a radio wave. A radio wave it selth produces only a tone or no sound what so ever with out some form of modulation. Common Modes or Modulation is Morse code, AM, FM, SSB. You may notice that a standard car radio or stereo there is a switch that has AM/FM on it, this is two different modulation styles that is used by radio stations as well as many other radio uses

Image of a carrier wave 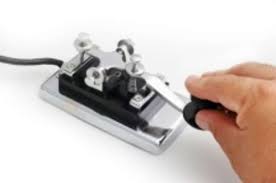 Is a type of character encoding that transmits Text information using rhythm. Morse code uses a standardized sequence of short and long Beeps to represent the letters, numerals, punctuation and special characters of a given message. The short and long elements can be formed by sounds, marks, or pulses, in on off keying and are commonly known as "dots" and "dashes" or "dits" and "dahs". The speed of Morse code is measured in words per minute (WPM) or characters per minute (CPM). Originally created for Samuel F. B. Morse's electric telegraph in the early 1840s, Morse code was also extensively used for early radio communication beginning in the 1890s. In the early part of the twentieth century, the majority of high-speed international communication was conducted in Morse code, using telegraph lines, undersea cables, and radio circuits. However, the variable length of the Morse characters made it hard to adapt to automated circuits. The most popular current use of Morse code is by amateur radio operators, although it is no longer a requirement for amateur licensing in many countries. In the professional field, pilots and air traffic controllers are usually familiar with Morse code and require a basic understanding. Navigational aids in the field of aviation. Morse code is designed to be read by humans without a decoding device, making it useful for sending automated digital data in voice channels. For emergency signals, Morse code can be sent by way of improvised sources that can be easily "keyed" on and off, making Morse code one of the most versatile methods of telecommunication in existence.

A technique used in electronic communication, most commonly for transmitting information via a radio carrier wave. AM works by varying the strength of the transmitted signal in relation to the information being sent. For example, changes in the signal strength can be used to reflect the sounds to be reproduced by a speaker, to specify the light intensity of television pixels, or indicate a 1 or a 0 in digital data.

Image of AM Signal

A refinement of amplitude modulation that more efficiently uses electrical power. Amplitude modulation produces a modulated output signal that takes up a large area of the band. Single-sideband modulation ½ this space and reduces power wasted on a carrier, at the cost of somewhat increased device complexity. The first U.S. patent for SSB modulation was applied for on December 1, 1915 by John Renshaw Carson. The U.S. Navy experimented with SSB over its radio circuits before World War I. SSB first entered commercial service in January 7, 1927 on the longwave transatlantic public radiotelephone circuit between New York and London. The high power SSB transmitters were located at Rocky Point, New York and Rugby, England. The receivers were in very quiet locations in Houlton, Maine and Cupar Scotland. SSB was also used over long distance telephone lines, as part of a technique known as frequency-division multiplexing (FDM). FDM was pioneered by telephone companies in the 1930s. This enabled many voice channels to be sent down a single physical circuit. Amateur radio operators began serious experimentation with SSB after World War II. The Strategic Air Command established SSB as the radio standard for its aircraft in 1957. It has become a de facto standard for long-distance voice radio transmissions since then.

USB: Upper side band, one of the two forms of SSB

LSB: Lower Side band, one of the two forms of SSB

is a form of amplitude modulation that represents digital data as variations in the amplitude of a carrier wave. In an ASK system, the binary symbol 1 is represented by transmitting a fixed-amplitude carrier. If the signal value is 1 then the carrier signal will be transmitted; otherwise, a signal value of 0 will be transmitted. Any digital modulation scheme uses a finite number of distinct signals to represent digital data. ASK uses a finite number of amplitudes, each assigned a unique pattern of binary digits. Usually, each amplitude encodes an equal number of bits. Each pattern of bits forms the symbol that is represented by the particular amplitude. The demodulator, which is designed specifically for the symbol-set used by the modulator, determines the amplitude of the received signal and maps it back to the symbol it represents, thus recovering the original data. Frequency and phase of the carrier are kept constant. Like AM, an ASK is also linear and sensitive to atmospheric noise, distortions, propagation conditions. Both ASK modulation and demodulation processes are relatively inexpensive. The ASK technique is also commonly used to transmit digital data over optical fiber. For LED transmitters, binary 1 is represented by a short pulse of light and binary 0 by the absence of light. Laser transmitters normally have a fixed "bias" current that causes the device to emit a low light level. This low level represents binary 0, while a higher-amplitude lightwave represents binary 1. The simplest and most common form of ASK operates as a switch, using the presence of a carrier wave to indicate a binary one and its absence to indicate a binary zero. This type of modulation is called on-off keying (OOK), and is used at radio frequencies to transmit Morse code (referred to as continuous wave operation), More sophisticated encoding schemes have been developed which represent data in groups using additional amplitude levels. For instance, a four-level encoding scheme can represent two bits with each shift in amplitude; an eight-level scheme can represent three bits; and so on. These forms of amplitude-shift keying require a high signal-to-noise ratio for their recovery, as by their nature much of the signal is transmitted at reduced power. 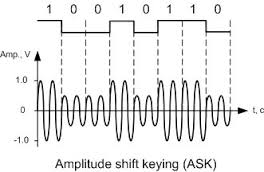 Conveys information over a carrier wave by varying its frequency. In analog applications, the frequency of the carrier is directly proportional to the value of the input signal. So the louder you talk the higher the frequency

Frequency-shift keying (FSK) is a frequency modulation scheme in which digital information is transmitted through discrete frequency changes of a carrier signal. The technology is used for communication systems such as amateur radio, caller ID and emergency broadcasts. The simplest FSK is binary FSK (BFSK). BFSK uses a pair of discrete frequencies to transmit binary (0s and 1s) information. With this scheme, the "1" is called the mark frequency and the "0" is called the space frequency. 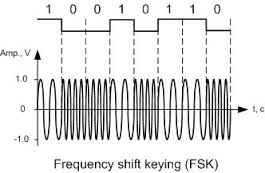 is a digital modulation scheme that conveys data by changing (modulating) the phase of a reference signal (the carrier wave).The signal is impressed into the magnetic field x,y area by varying the sine and cosine inputs at a precise time. It is widely used for wireless LANs, RFID and Bluetooth communication. Any digital modulation scheme uses a finite number of distinct signals to represent digital data. PSK uses a finite number of phases, each assigned a unique pattern of binary digits. Usually, each phase encodes an equal number of bits. Each pattern of bits forms the symbol that is represented by the particular phase. The demodulator, which is designed specifically for the symbol-set used by the modulator, determines the phase of the received signal and maps it back to the symbol it represents, thus recovering the original data. This requires the receiver to be able to compare the phase of the received signal to a reference signal — such a system is termed coherent (and referred to as CPSK). Alternatively, instead of operating with respect to a constant reference wave, the broadcast can operate with respect to itself. Changes in phase of a single broadcast waveform can be considered the significant items. In this system, the demodulator determines the changes in the phase of the received signal rather than the phase (relative to a reference wave) itself. Since this scheme depends on the difference between successive phases, it is termed differential phase-shift keying (DPSK). DPSK can be significantly simpler to implement than ordinary PSK since there is no need for the demodulator to have a copy of the reference signal to determine the exact phase of the received signal (it is a non-coherent scheme). In exchange, it produces more erroneous demodulation. 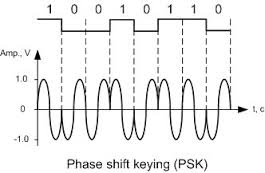